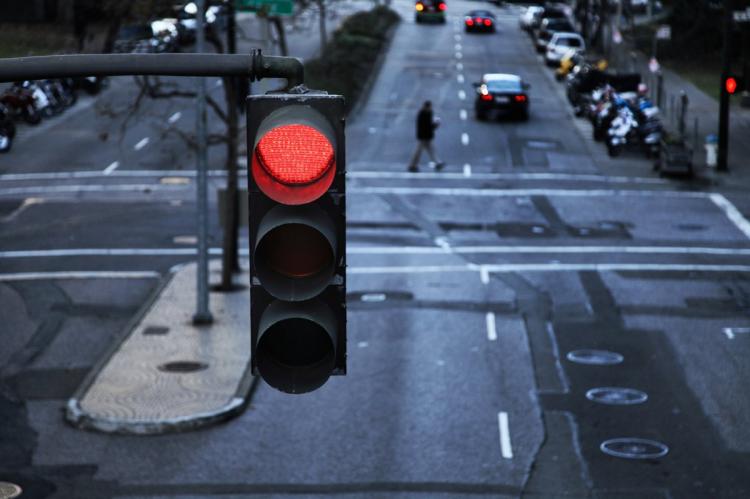 Running A Red Light In NYC

New Yorkers are always in a rush. Afterall, we don’t call it a New York minute for nothing. Subsequently, running a red light is one of the most common traffic violations that drivers commit in NYC. However, NY drivers should know how dangerous this practice actually is. According to the Federal Highway Administration, running a red light is the most common cause of urban crashes in the United States.  It is not only dangerous, but it is also quite costly for drivers who are caught doing it.  A New York City driver who runs a stop sign or red light will not only have to pay a hefty fine. But they may also face other serious penalties such as additional points to your license or even arrest.

There are two ways to get caught running a red light: either being personally pulled over by a police officer or being photographed on a red light camera. The fines for red light violations depend on a number of factors, including how you are caught, where the violation occurred and the driver’s record. Drivers caught committing this violation can expect to face steep penalties ranging anywhere from $50 to $1000 in fines. It is vital for every NYC driver to know the rules and regulations for running a red light. This article gives an overview of how red light regulations work in NYC as well as some of the consequences you face if you commit a red light violation.

This traffic violation is more serious than a violation of a red light camera. It carries some pretty hefty fines depending on the severity of the infraction and your driving record.  If you receive a ticket in NYC, the fines for your first offense can range from $100-300. Get a second ticket within 18 months of the first and the fines jump up to $200-$500. If you receive a ticket for the third time in this 18-month period, the fines jump to a staggering $500-$1000. You will also have 3 points added to your license for each offense. If the officer deems it necessary, they may even decide to arrest you. This, of course, depends on how reckless the act of running the red light was.

In addition to the fines, points, and possible arrest, you may even see an increase in your auto insurance rates. Insurance companies may choose to raise your rates because they find that people who run red lights are statistically more likely to get into an accident than those with a clean record.

The flash of a red light camera can give any driver a panic attack. But getting a red light camera ticket is quite different than being pulled over in-person by a police officer in New York City.  A red light ticket from a camera is actually treated more like a parking ticket.

Cameras are stationed around the city to photograph vehicles running through red lights. It’s always good to remember this anytime you approach a red light. After the camera catches your vehicle running a red light, the city will send you a $50 ticket in the mail. As the registered owner of the car, you are responsible for the violation and not necessarily the driver of the car at the moment the ticket is given. Unlike getting stopped by a police officer for running a red light, points are not added to your license for this kind of infraction and will not be reported to auto insurance companies.

How To Avoid Red Light Tickets

There are a few things you can do to make sure you do not get hit with a red light ticket.  First, remember that when approaching a stop sign or red light (solid or flashing), NYC drivers must come to a complete stop before reaching a marked stop line or the crosswalk at the closest side of the intersection.  Another thing to be mindful of, particularly if you are visiting, is that in New York City drivers aren’t allowed to make a right turn at a red light unless a sign specifically says it’s okay. So don’t try it within New York City limits.  This goes for making a left on red. Drivers cannot make a left on red in the city unless a sign or signal indicates and allows for one.

Meaning of a Yellow Light

Some states require drivers to stop at yellow lights unless it’s unsafe to do so. Many out of state drivers who visit NYC may think the same applies here.  However, this is not the case in New York City. Here, a steady yellow light is just a warning that the light is about to turn red. It is legal to drive through a yellow light, providing that your vehicle enter the intersection or past the crosswalk or stop line prior to the light turning red. In other words, so long as you enter the intersection before the signal turns red, you haven’t violated the law. So don’t fret drivers, you will not get a ticket for going through a yellow light.

At the end of the day, if you run a red light you may end up facing points on your license, steep fines, an increase in insurance and even arrest. As congestion and traffic increases in the city so has the dangers that cars pose to New Yorkers. To offset this, the city has instituted it’s Vision Zero program to address the safety concerns that citizens have. Nevertheless, city officials are going after drivers who drive recklessly. Running a red light surely falls under this category. So please drivers, drive smartly and safely: don’t run a red light.

Sometimes as hard as we try, however, running a red light may still happen.  If you have received a parking ticket for running a red light, don’t let it sit there. You are better off paying the parking ticket immediately and avoiding the costly late fees. Afterall, why make an already expensive ticket worse? You also have the option to dispute tickets if you feel like you have a case. If you believe you unjustifiably received a ticket for running a red light,  fight the ticket so you can avoid being found guilty of a traffic offense that could impact your future driving. Either way, you will be saving yourself a headache and a hit to your wallet.