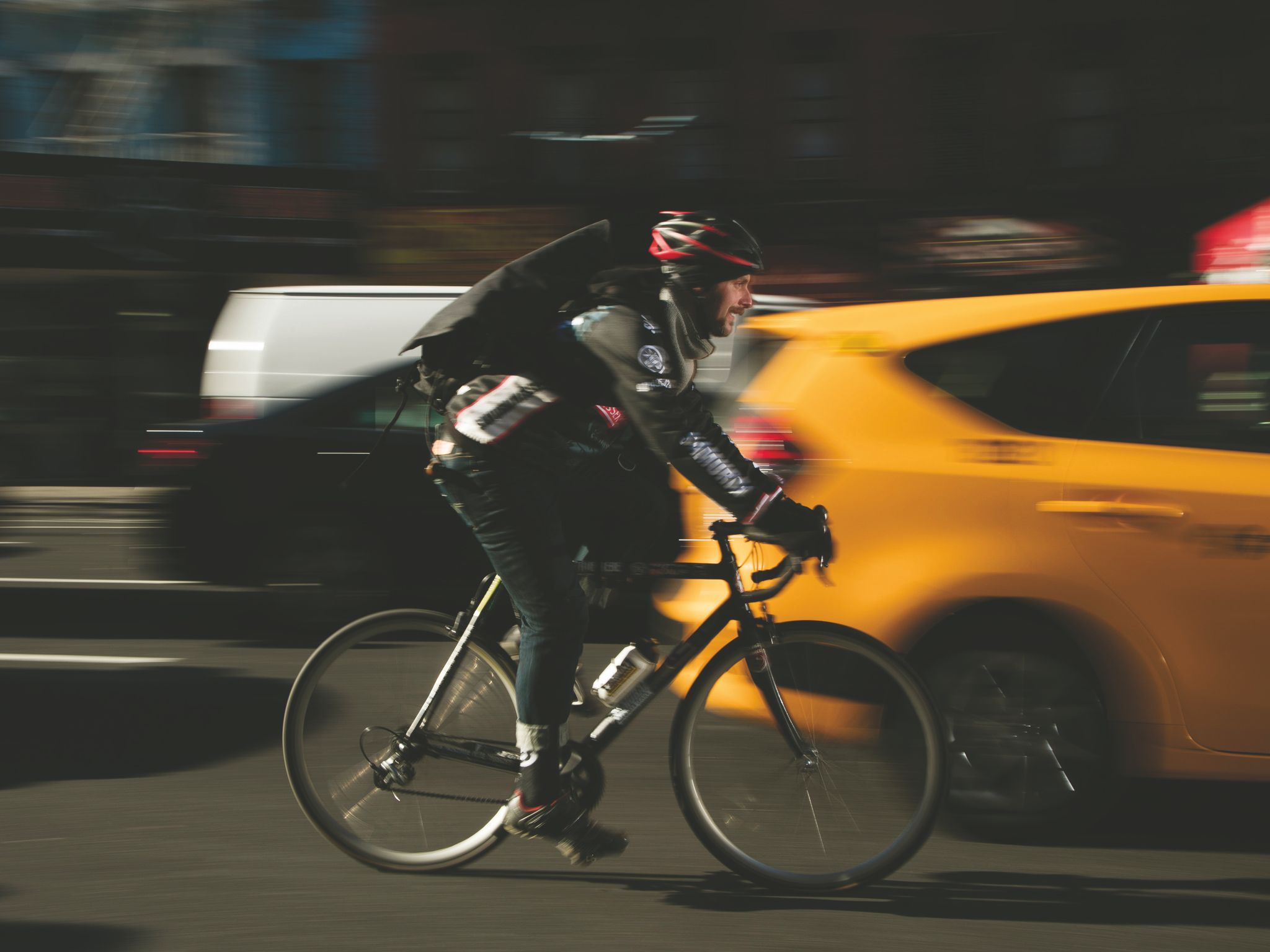 Move Over Drivers And Make Way For The Bike Lane

Biking has become more popular in New York City over the past few decades. Back in the day, it might have been a rarity to see someone biking in the city, let alone see bike lanes. Now, the practice is so common that bicycles often outnumber cars on certain city streets during rush hour. New York City has recently implemented many developmental improvements to help make traveling by bike easier.

Over the past 11 years, the city has added almost 800 miles of bike lanes, coming to a grand total of more than 1000 miles. Additionally, Mayor Bill de Blasio is making a consistent effort to “grow the bike lane network”, and recently stated his goal of increasing the number of city trips by bike to 6% by 2020. With the increase in bike lanes comes an increase in encounters between drivers and cyclists.  This article will explore the rules and laws regulating what drivers can do in and around bike lanes as well as some tips on how to drive safely and avoid getting into accidents with cyclists.

What is A Bike Lane?

The city requires cyclists to use either a bicycle lane or path if one is available. The New York State Vehicle and Traffic Laws (VTL) defines a bike lane as “a portion of the roadway which has been designated by striping, signing and pavement markings for the preferential or exclusive use of bicycles,” and a bike path as, “a path physically separated from motorized traffic by an open space or barrier and either within the highway right-of-way or within an independent right-of-way and which is intended for the use of bicycles.

Drivers will encounter three different classes of bike lanes in NYC: Class I, Class II and Class III. Class I bike lanes are usually physically separated by barriers from vehicular traffic and pedestrian paths. Next, Class II bike lanes are simply marked with paint and signage and lie between the curb of a sidewalk and a traffic lane. And lastly, Class III bike lanes share the road with vehicular traffic. This means that the bike lane does not have any distinct painted line that separates it from the rest of traffic. The city does use signage to inform bikers and drivers of the lane’s existence on the street. 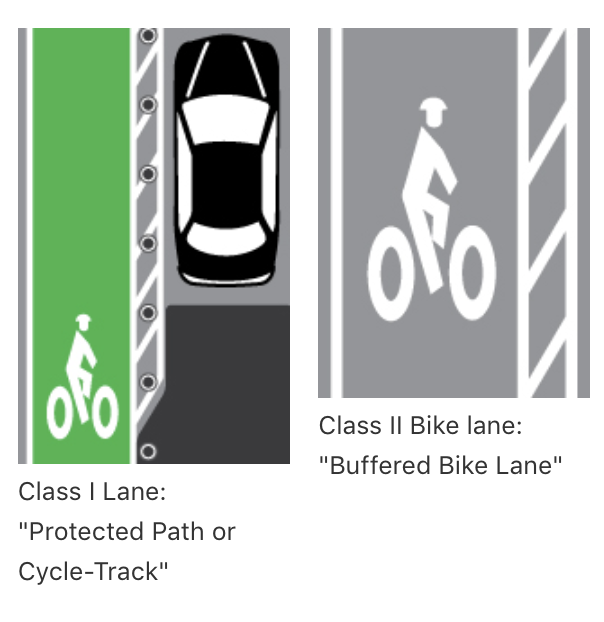 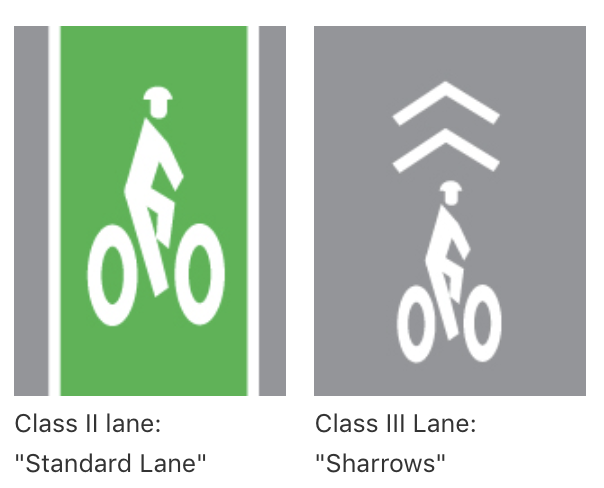 New York State VTL § 1231 grants cyclists all of the rights that the driver a motor vehicle has and subjects them to the same duties as well. While New York state law does regulate cycling in NYC, the city has its own laws that further regulate drivers to ensure the safety of cyclists.  According to the NYC Department of Transportation (DOT) traffic rules, bicycle lanes are considered “general no stopping zones,” and “driving on or across bicycle lanes [is] prohibited.”  This means that both passenger cars and commercial vehicle operators are not permitted to park, stand or stop within or otherwise obstruct bike lanes.

Subsequently, drivers cannot stop temporarily to drop off or pick up passengers, groceries even for quick an NY minute. The rules also apply to delivery truck drivers, you cannot make a stop in the bike lane to make deliveries. The NYC list of parking violation codes makes it clear that double-parking in a bike lane, Violation 48, carries the same $115 fine as double-parking anywhere else, Violation 46.

The City further seeks to protect bikers from cars with the traffic law RCNY § 4-12(c). This makes it illegal to get out of a vehicle in a manner which endangers cyclists. This  is often referred to as “dooring.” If a car door injuries a cyclist, the driver or occupant of the offending vehicle is liable for all injuries.

Take Care On The Roads

Whether you’re a pedestrian, a biker or a driver, we all want to be safe on the road. The road can be a very dangerous place, particularly if people aren’t careful. There have been untold numbers of accidents when these two communities collide, often causing friction between bikers and drivers. But this doesn’t need to be the case; the truth is that vans, cars, and bicycles share the road, and it’s important to know how to be safe. Drivers must take the initiative and make sure that the bike lane does not become an obstacle course. With this in mind, we thought it prudent to put together some tips for drivers, some advice, and suggestions on how to drive safely around cyclists.

Cyclists have the right to share the road and travel in the same direction as motor vehicles. Like pedestrians, cyclists can be difficult to notice in traffic. Despite having the same rights to the road as cars, cyclists have little protection from a traffic crash. This is why drivers should take extreme caution when driving near cyclists. Be sure to check your car’s “blind spots” before you parallel park, or open a driver’s side door, or leave a curb. Don’t rely only on your rearview mirrors. Always turn your head to look for bicyclists that may be alongside your car or approaching it.

When driving, approach cyclists with the utmost care and caution. Give them room and slow down as you pass them. Air pressure from a quickly passing vehicle can throw them off balance. Also never obnoxiously honk your horn at cyclists. This can easily startle anyone and can lead to an unfortunate accident.  Be cognizant that cyclist near or in front of you may react to road hazards with a sudden change speed, direction, or lane position. Thus, the rules of the road and right-of-way apply to and protect cyclists, skaters and pedestrians alike. You must always yield the right-of-way to them.

Pedestrians, cyclists and motorists alike all are important stakeholders of NYC streets. Drivers should recognize this and make sure they play their part in keeping city streets safe. Drive safely!