New York City has a lot of kids and with that comes a lot of school buses. As the new school year inches closer, roads will soon see a lot more traffic. Unfortunately, this increases the possibility of terrible traffic and pedestrian accidents on our city streets. With recent high-profile traffic tragedies and increasing public outcry against dangerous driving, drivers now more than ever this fall need to remember to follow a few rules of the road, especially when around a school bus. Forgetting those rules and being caught doing so could carry stiff penalties for motorists or, even worse, cause a serious accident.

School Buses Are Meant to Protect Our Kids

School buses are statistically the safest way for students to get to school.  Their sheer size, height, and weight make it hard for passenger cars to cause any serious damage. They also have other safety elements to protect them: flashing lights, stop-sign arms, and their recognizable color make them almost impossible to miss on the road.  Not to mention, school buses keep an estimated 17 million cars off the road.

Still, Between 2004 and 2013, more than 1,000 people died in school-transportation related crashes, according to the National Highway Traffic Safety Administration (NHTSA). Seventy-one percent of fatalities were occupants of other cars while more than a third of students killed were struck by other vehicles sharing the road.

For this reason, school buses require the most care and protection out of every other vehicle on the road. School buses are protected incredibly well under NYC and generally U.S. traffic law. This, of course, should be the case: we trust these buses to take our kids safely to and from schools. Without proper laws and responsible driver behavior to protect school buses, we would be putting children in immense potential harm.

What’s The Law In NYC

It is illegal in New York to pass a school bus when it is stopped and its red lights are flashing. The law applies to vehicles approaching the rear and front of the bus. Motorists are required to stop for buses when its red lights are flashing, even when the bus is stopped on a multi-lane road or highway. If the bus has its yellow lights flashing, that means the bus is preparing to stop.

Illegally passing a school bus is treated as a moving violation in NYC.  Many drivers often refer to moving violations as traffic tickets. However, if a driver behaves exceedingly reckless while passing a bus, they may also face the threat of jail.

Under current state law, the first offense for passing a stopped school bus could result in a $250 to $400 fine. It can also lead up to 30 days in jail. The possible penalties for a second conviction within a three-year period range include a $600 to $750 fine. Drivers with a second offense may face up to 180 days in jail.  For three or more convictions within a three-year period, the fine would range from $750 to $1,000. Offenders may also spend up to 180 days in jail as well. DMV’s Traffic Violations Bureau (TVB) processes tickets for non-criminal moving traffic violations issued in the five boroughs of New York City.

How To Drive Safely Around A School Bus

If a school bus is at a full stop with stop signs out and lights blaring, you know what to do. Stop immediately!  This is perhaps the most crucial point when it comes to road safety for kids. As children exit and enter the bus, they may not be aware of other vehicles on the road. If even adults have issues looking both ways before crossing the street, it’s no surprise that children are often susceptible to getting hurt during this crucial point.

Children may dart into the street at any moment. Keep your eyes peeled, especially around the time when school starts and ends. Also, remember to always drive cautiously around school zones. You will encounter the most buses and children around this area.

When backing out of a driveway, keep an eye out for kids walking or riding their bikes. This tip is especially important when kids are headed to school in the morning or home in the afternoon.  Below are some additional tips from the NYPD to keep in mind when driving around school buses. Stay safe out there drivers! 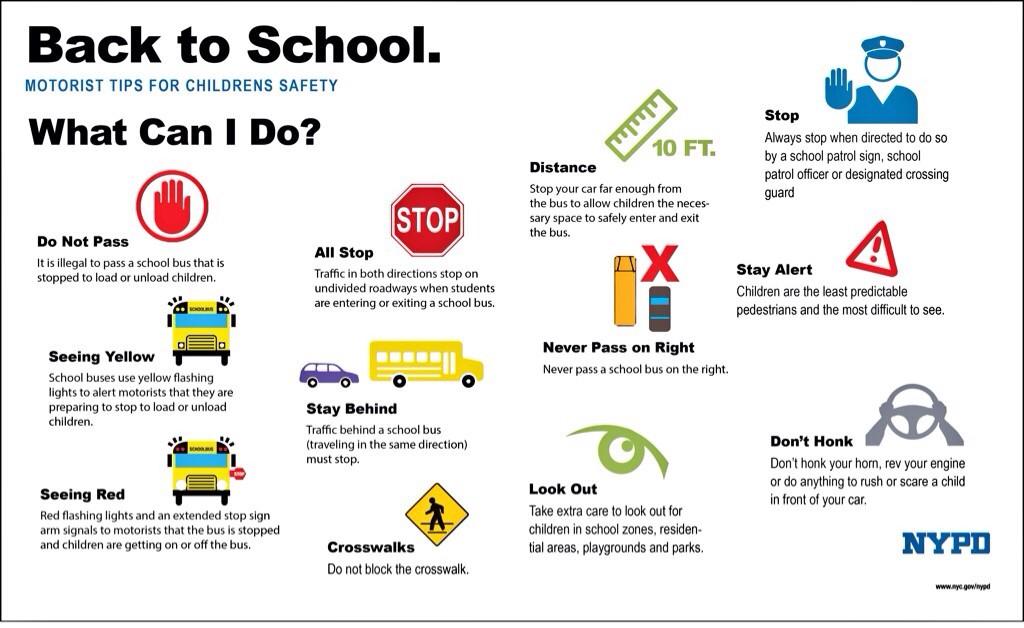