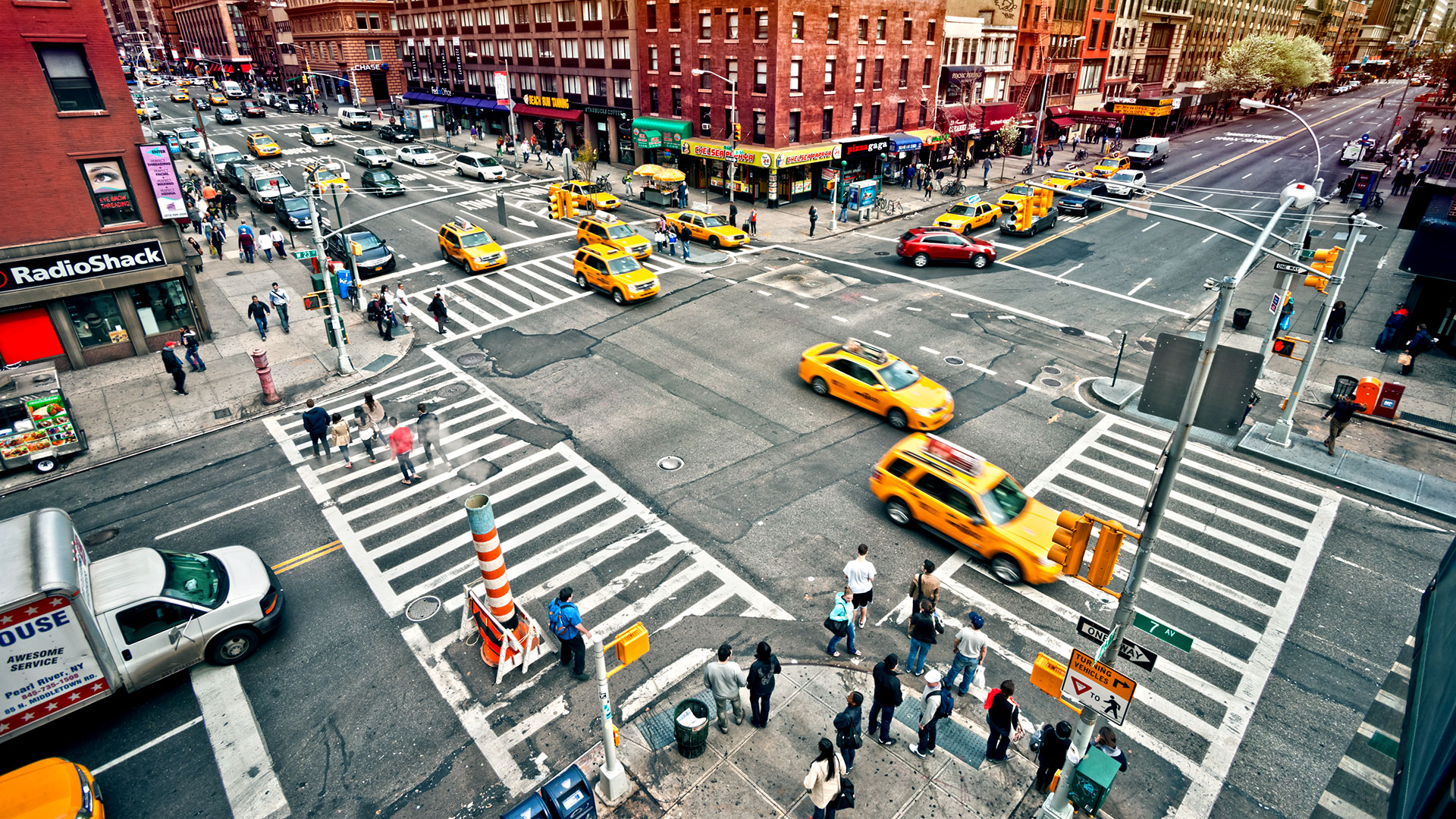 Crosswalk: The Nexus Of New York

Getting around NYC is a constant test of nerves for drivers, bikers, pedestrians and everyone in between. Pedestrians have to dodge nonsensically swerving tourists who don’t know how to look anywhere but up. Bikers have to constantly weave in and out of the gauntlet of cars and trucks parked in the bike lane. And let’s just say potholes aren’t the only things that drivers have to dodge when cruising the city streets. While each group has their own place on the road, there is one place where all parties meet: the crosswalk.

The crosswalk in NYC is the nexus where all stakeholders of the city streets have to deal with each other. One thing that all pedestrians, bikers, and drivers should know is that the crosswalk is a sacred space. Moreover, its a sacred space that should never be violated! “What’s the big deal?”, you may ask. At first glance, crosswalks seem to simply be just some white paint on the asphalt. However, crosswalks may not always seem so apparent. Not knowing the differences can leave you with a hefty $115 parking ticket. Moreover, with the Vision Zero Program in full swing, now more than ever is it important for drivers to really understand crosswalks. This article will break down exactly everything you need to know about them.

What Is A Marked Crosswalk?

Crosswalk. (i) Marked crosswalk. That part of a roadway defined by two parallel lines or highlighted by a pattern of lines (perpendicular, parallel or diagonal used either separately or in combination) that is intended to guide pedestrians into proper crossing paths.

What Is An Unmarked Crosswalk?

Now let’s get to the unmarked crosswalk, here’s how the city defines it:

Nevertheless, it could be inferred that an unmarked crosswalk is any part of an intersection that forms a straight line from one curb cut on one side of the road to the other.  Whether marked or unmarked, drivers should yield to pedestrians at all intersections.

However, if you’re acting as a pedestrian, you shouldn’t count on drivers stopping at an unmarked crosswalk, even if you believe that you have the right-of-way. Without traffic control signals to remind drivers to slow for you, crossing at an unmarked intersection could be dangerous.

Rules Drivers Should Remember About Crosswalks

If you’re a driver in NYC wondering what is the proper thing to do when approaching a crosswalk, the city lays it out clear and simple in Section 4-04 of the New York City Department of Transportation Traffic Rules:

Drivers should always approach a crosswalk with caution and always defer to the safety of all pedestrians. If you see a pedestrian wanting to cross or already crossing, slow down to a complete stop and give them all the time they need to cross the street safely to the other side. While the onus of pedestrian safety is largely on drivers, the city does regulate how pedestrians can cross. Here’s what they have to say:

(2) Pedestrians shall not cross in front of oncoming vehicles. Notwithstanding the provisions of (1) of this subdivision (b), no pedestrian shall suddenly leave a curb or other place of safety and walk or run into the path of a vehicle which is so close that it is impossible for the operator to yield.

Let’s be real, jaywalking is a storied NYC past-time, New Yorkers do it all the time. Even though jaywalking isn’t strictly regulated anymore, pedestrians should still use common sense. Please pedestrians, abide by traffic regulation and play your part in keeping roads safe by not jaywalking.

Knowing what to do with crosswalks can be very tricky for drivers, especially when it comes to parking. According to the NYC DMV, parking or standing within 20 feet of a marked pedestrian crosswalk at an intersection is illegal and can result in a ticket.  Here is the law on the City books stipulating this:

In fact, we’d argue that even beyond parking, simply stopping in a crosswalk to let out a passenger or drop something off is an easy way to get yourself a parking ticket. Sure, you can totally get away with parking right before the lines delineating where an intersection begins. Still, we think its best to make sure that you give an appropriate amount of space between your car and the crosswalk.  Here are some other things to keep in mind about crosswalks:

If you do happen to get a crosswalk parking ticket down the road, check out our articles on how to pay or how to fight them, we promise you won’t regret it.