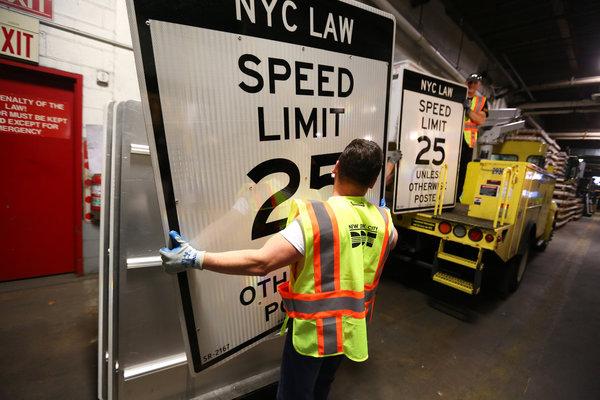 Data Backs Up What Safety Advocates Have Long Campaigned For

There’s some encouraging news for cities trying to reduce speeding: New research from the Insurance Institute for Highway Safety reaffirms the idea that lowering posted speed limits is effective at reducing driver speeds. New York has led the way in changing regulations to improve car and pedestrian safety. While the study pools its data from drivers in Boston, its results can apply to other cities. Studies like only reinforce the overwhelming data that shows small changes to the way we behave behind the wheel can have dramatic effects. As part of Vision Zero programs, cities like Boston and New York have lowered speed limits in a multi-pronged effort to make streets safer for pedestrians and bicyclists.

What Does The Report Say?

The insurance industry-funded group conducted its study in two cities. First, in Boston where speed limits were lowered in certain areas from 30 to 25 mph. Second, in Providence, Rhode Island, which already had 25 mph urban speed limits. In both cities, the IIHS deployed traffic flow counters in 5-hour blocks from 10 a.m. to 3 p.m. This was done over two weekdays before and after Boston’s speed limit change. The IIHS used 50 data collection sites in each city. These sites were selected because of similar geography and a lack of posted speed limit signs.

The results were strikingly clear. The number of cars exceeding 25 mph, 30 mph, and 35 mph significantly decreased all across Boston. The largest reduction for vehicles exceeding 35 mph.

In fact, the IIHS study found the odds of a vehicle exceeding 35 mph on a 25 mph street fell by a whopping 29.3%. The odds of a vehicle exceeding 30 mph dropped by a smaller but still significant percentage. There was an 8.5% drop with the slower speed limits. The study offered “odds” because it tracked speeds at specific sites rather than following the same drivers before and after the change.

The IIHS champions the 25 mph speed limit for a reason. The mere 5 mph reduction in speed limits results in a considerably lower risk of pedestrian fatalities. Citing AAA Foundation for Traffic Safety data the IIHS said in a statement that, “a pedestrian struck by a vehicle at 25 mph has a 25 percent risk of sustaining a serious or fatal injury, and the risk jumps to 50 percent at 33 mph and 75 percent at 41 mph.

Lower Speed Limits And Its Effects In NYC

Speeding is a leading cause of fatal crashes in New York City. This is why lowering the speed limit in NYC has proven so effective. The NYC City Council approved a bill in 2014, that reduced the maximum speed on most NYC streets to 25 mph from the 30 mph. Since then, New York City has experienced a steady decline in serious traffic accidents. In fact, the city saw a 28 percent decline in traffic fatalities. Moreover, pedestrian fatalities have seen the greatest fatality decline among all modes of travel, dropping by 45 percent, from 184 in 2013 to 101 in 2017.

Even a small difference in miles per hour drastically changes a pedestrian’s odds of survival. In 2014, the City also began a speed camera program in school zones. Evidence from the first two years of the speed enforcement program shows that cameras are very effective in reducing dangerous driving behavior. In fact, speeding during school hours at fixed camera locations dropped over 63 percent, and injuries at these locations decreased over 14 percent. Despite the recent political showdown and brief shutdown of speed cameras, they’re back and regulating drivers behaviors again.

Researchers have also uncovered a startling developmental fact: children under 15 are biologically incapable of accurately perceiving the speed of an oncoming car if it’s traveling faster than 20 mph. This fact is why we hear so often about children “darting” into traffic. Studies show that every 1 mph reduction of vehicle speeds on urban, pedestrian-heavy streets leads to a 6% decrease in traffic fatalities. And New York City is home to the most pedestrian-dense streets in the country.

Why Do Lower Speed Limits Work?

Study after study ultimately shows that lower speeds do save lives.  Why? The science is clear: If a pedestrian is hit by a speeding driver traveling at New York City’s default speed limit of 30 mph, there is a 30% chance that person will die. That number goes up to 80% if the driver is going 40 mph, as too many motorists do. But at 20 mph—the speed limit we have—there’s a 98 percent chance that the same pedestrian will live. When drivers aren’t flying down the road, they actually have more time to brake when something unexpected happens. Lower speeds mean that even when a driver makes a mistake or a pedestrian darts into the street, there is often time to avoid a crash and.