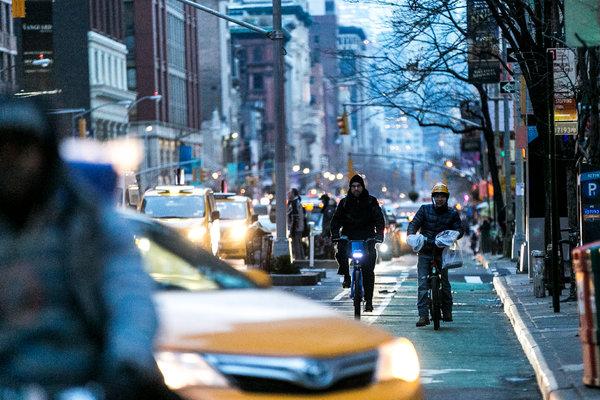 Biking has become very popular in New York City over the past few decades. Now, the practice is so common that bicycles sometimes outnumber cars on certain city streets during rush hour. You can see bike lane after bike lane teeming with cyclists going about their day. It’s overall great that more New Yorkers are choosing to bike. However, with more bikes on the streets, comes the increased chance for more dangerous if not fatal accidents.

Despite how tough NYC cyclists can be, a biker is simply no match for a car. In fact, many city streets can be very dangerous for bikers even with the growth of bike lanes available. A  recent report identified the 12 most dangerous areas for pedestrians and cyclists and shows where in the city cyclists complain the most about vehicles blocking bike lanes.

To qualify as a hotspot, an area must have had at least 25 complaints within an 82-foot radius. Here were the eight hot spots:

Reports like this play a crucial role in identifying dangerous norms found on the road.  Moreover, they can help identify solutions to the dangers found on city streets. For example, this report, in particular, helps the city identify the most concerning areas with a “critical mass of complaints” and thus know where cyclists are more likely swerve into other traffic lanes.

Of course, the report does have a pitfall. This is due to the fact that there’s actually no true way of knowing just how many cyclists experience blocked bike paths on a regular basis. This is clearly due to the fact that making complaints for blocked bike lanes is a relatively new 311 option. There’s a big chance that some cyclists simply may not even be aware that they can file such complaints. Also, as bikers are constantly on the move, many are likely unable to call, text or email while cruising the city.

With all the dangers bikers face, thankfully there’s some legislation coming to city streets that may help address the problem. For example, Central Park West could soon be getting more protected bike lanes. A resolution to install the lanes was approved by Community Board 7 on the Upper West Side.

Calls for the new lanes have been growing since an Australian tourist was killed while riding a bike near West 67th Street and Central Park West in August. The tourist named Madison Jane Lyden was sadly killed by a garbage truck after swerving into the street to avoid a cab that was dangerously blocking the bike lane.

Another piece of legislation in the works seeks to protect bike lanes from construction zones as well. With the city’s current city housing boom, there’s a growing glut of construction equipment found on blocks across the city. More often than not, this equipment takes up precious street real estate. The bike lane is usually the number one victim.

To combat this growing trend, City Council Member Carlina Rivera announced plans to introduce legislation requiring construction companies to provide safe detours around the hazards created by construction. The bill would create citywide standards for bike lane detours. Here, the city would have to clearly demarcate bike lanes. In addition, bike lanes must be at least four feet wide, protected from cars by solid barriers, and separated from pedestrian traffic.

Many local residents and board members around the city say the protected bike lanes should have been installed long ago. After all, one of the best was to keep cyclist rights of way clear may be to design streets so that bike lanes are located between the parking lane and the curb.

Are bike lanes  blocked in your neighborhood? Let us know in the comments below!